Are you curious about what some of the most popular British foods might be? Let’s look at the top English food options in British cuisine. 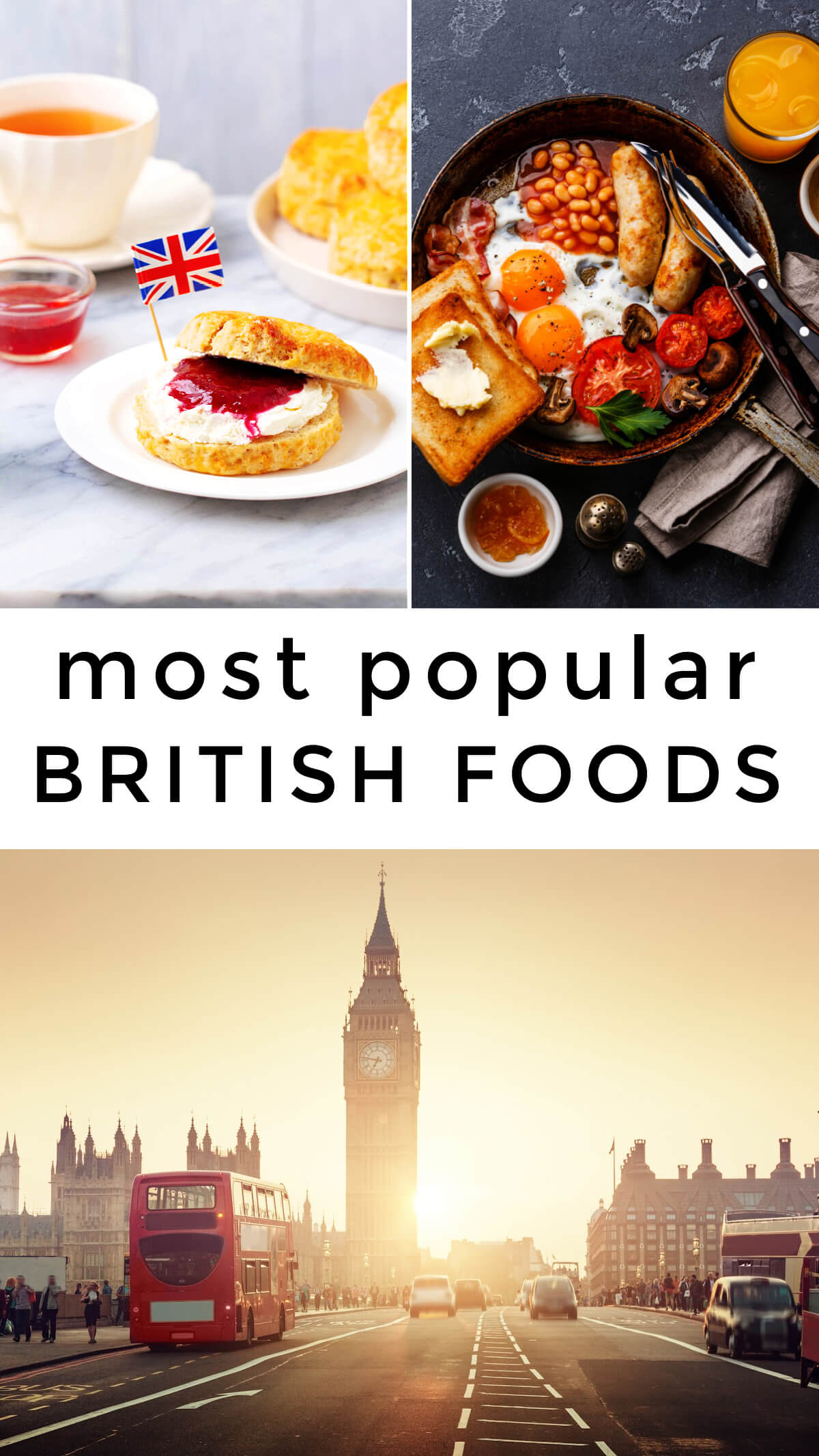 For us food lovers and travel enthusiasts, nothing beats the feeling of tasting an authentic dish from a different culture. The good news is that visiting the UK is not a necessity to enjoy traditional English food. Thanks to the internet, anyone can prepare British cuisine just like the English with dressing and accent to match.

There is so much to enjoy in the UK’s food culture than tea. British Food spans centuries of English recipes, cooking styles, and traditions. Some cuisines became an English staple because of wars that rummaged the land with invading troopers like the Vikings, Romans, and French.

Regardless of influence, English meals remain simple and delicious. As you may have guessed from the name of this website, my heritage is also British. Here is a list of British foods to enjoy at home or while traversing the land of the British.

Where to Find British Food in the U.S.

You might be thinking, “Where can I find Britsh food near me?” Well, even if you don’t have an English pub, British shop, or fish and chips shop in your town, you might be able to find authentic English ingredients.

Some grocery stores such as Bristol Farms have a small selection of foods from the U.K., including beans and mushy peas. World Market is always stocked with English foods.

What is the National Dish of England?

You might be surprised to find out that one of the most popular foods in England is an Indian dish. Chicken tikka masala is known as the most popular dish and is often referred to as the National dish of England. Next up would be fish and chips.

Why is Indian Food so Popular in the UK?

Indian food, especially curries and chicken tikka masala, has been popular in the UK since the 18th century after British traders discovered it while traveling.

Queen Victoria’s love for Indian food further popularized the cuisine in England as one of the top beloved British foods.

After World War II, many South Asians migrated to the UK and opened Indian restaurants. Indian food is still popular in the UK today. You can even find my British grandmother’s famous curry recipe in the Yummy Mummy Kitchen cookbook!

Today international food from fantastic sushi to Indian can be found in the U.K. However, there traditional English foods are still very popular. Here are the top 12 British foods to know about.

First off the list is the long preserved English breakfast. This national dish traces back to the thirteenth century. It began by the Gentry and got adopted by the Victorians and Edwardians, who normalized the ingredients found in the modern English breakfast.

I suppose the meal is known colloquially as the fry-up because of the number of fried contents.

Ingredients vary from one corner of the UK to the next. For the most part, this is an exhaustive traditional breakfast. Most people serve it with tea or coffee. 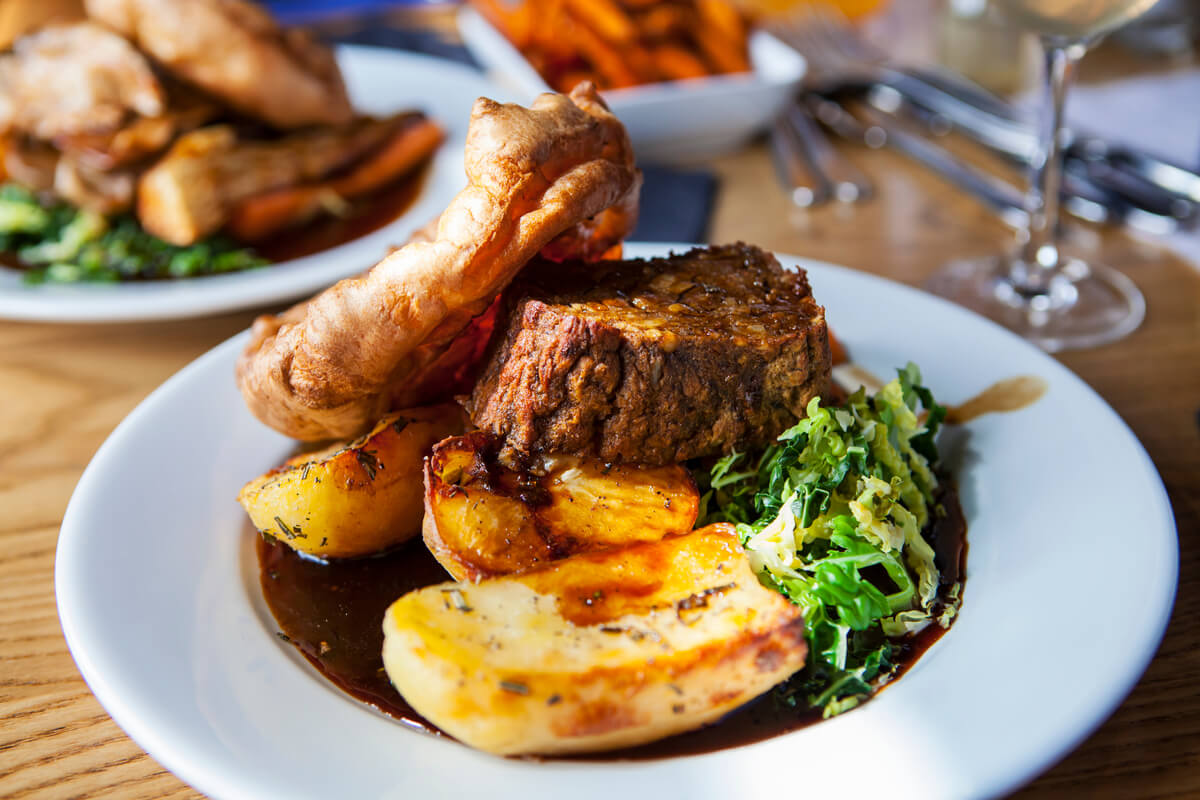 The Sunday roast is a meal traditionally served on Sunday lunch. The meal stems back to King Henry VII’s reign when royal guards revealed roasted beef earning the name beefeaters since the fifteenth century.

During the industrial revolution, people would leave beef and vegetables slowly cooking in their ovens as they headed to church. Juices from the ingredients would make a rich gravy that got poured on top of the food. Even the poor who could not afford ovens or fireplaces took their Sunday roasts to bakeries and collected their meal after church because baking did not occur on Sundays. 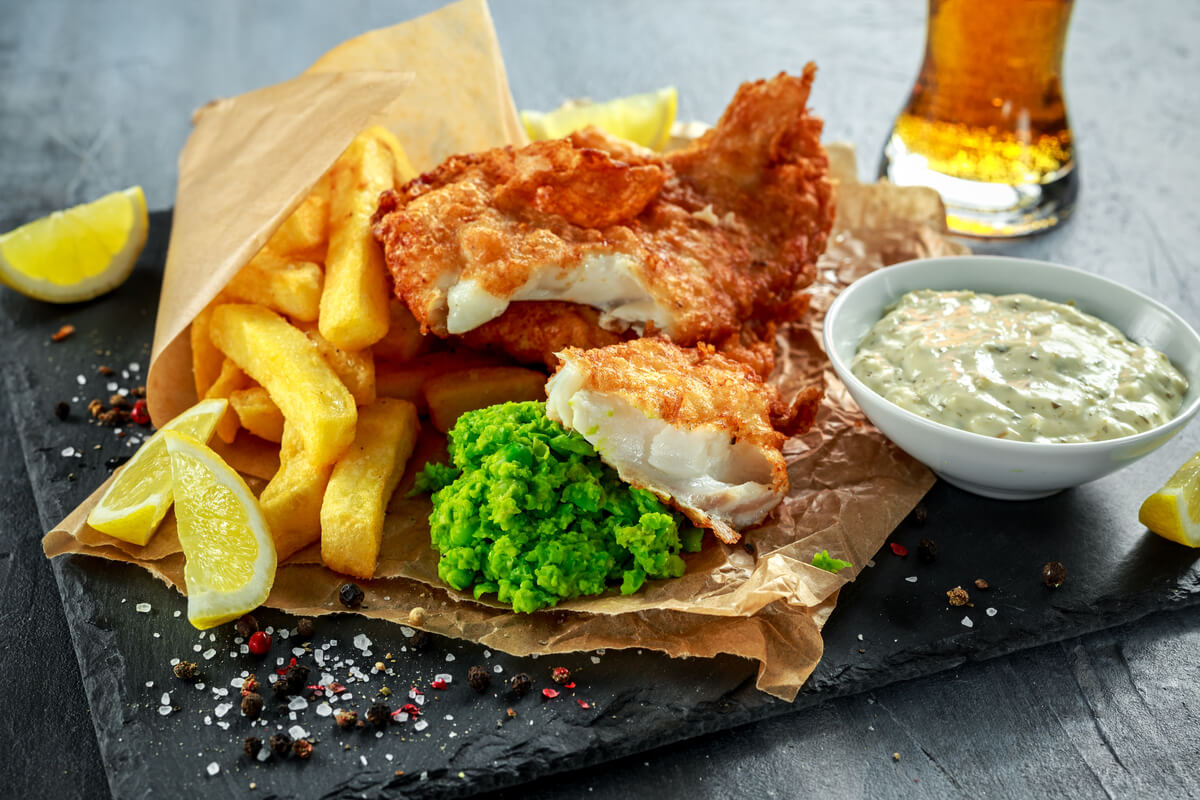 Fish and chips got introduced in England by Jewish and Portuguese immigrants. The meal originated in Portugal as a necessity or convenience rather than culinary ingenuity. It found its way into the UK in the 16th century and has become a national staple.

Fish and chips is one of the most famous English foods, but it’s popular in the U.S. too. You can find it in casual seafood restaurants or make it at home in the air fryer.

The cod, haddock, and pollock are the most common choices for white, thick fish for this British recipe. Fish and chips are traditionally served dressed with just a little malt vinegar and sea salt. Tartar sauce is another popular accouterment, and mushy peas are traditional on the side.

The shepherd’s pie is not pastry. It is a meal made of minced lamb, vegetables, and potatoes, which gained popularity in the eighteenth century as a convenience meal. The Irish were peasants at the time under British rule. Most were poor, lived in cottages, and ate whatever was available and affordable. They used beef left over from their dinner roast, vegetables, and potato toppings to make what came to be known as cottage pie.

The only difference between cottage and shepherd pie is the type of meat. The shepherd’s pie is an upgrade of the cottage pie and uses mutton instead of beef.

This British cuisine is excellent comfort food and easy to make. As a vegetarian, I prefer to make my Lentil Shepherds Pie. 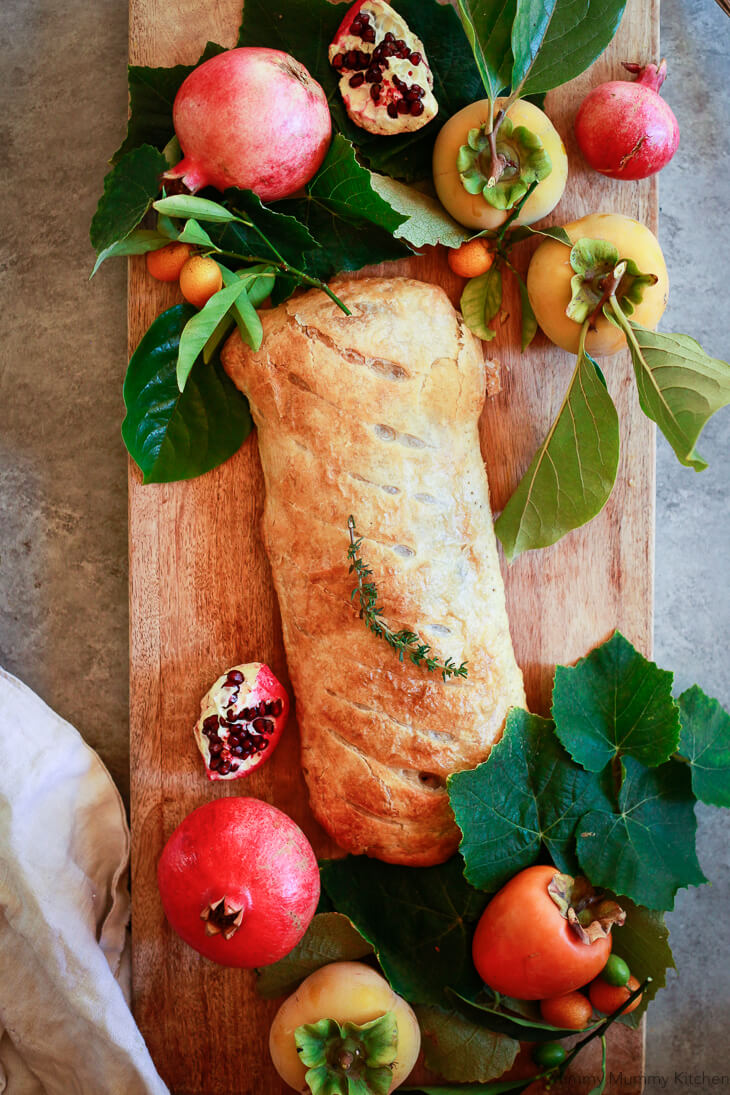 Although beef has been on the English food menu for centuries, the beef wellington is not one of their original dishes. The meal, although named after an Irish man, originates from France.

The name of this main course meal comes from The wellington has beef fillet steak, beef tenderloin, or filet mignon as its center. The meat has a mushroom or pâte de foie gras wrapping. A flaky or puffy casing covers the entire wellington.

The most delicious Wellingtons, in my opinion, are meatless. Try this beautiful Portobello Mushroom and Vegetable Wellington for your next special occasion meal. 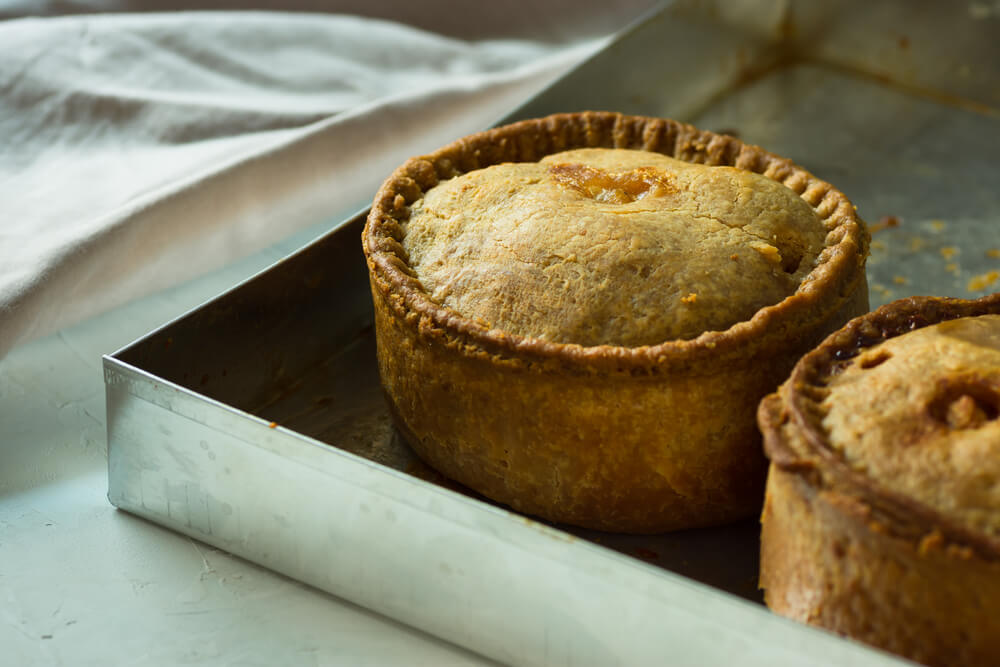 Steak and kidney pie is a much-loved traditional British food. It is on the menu of many eateries or street food joints around the country. It also has a simple recipe, making it easy to make at home. The entire dish is a mixture of kidney and meat fried with onion and gravy wrapped in pastry. People enjoy this meal with chips.

If you’d like to try a lighter vegetarian version, try a Vegetable Pot Pie. 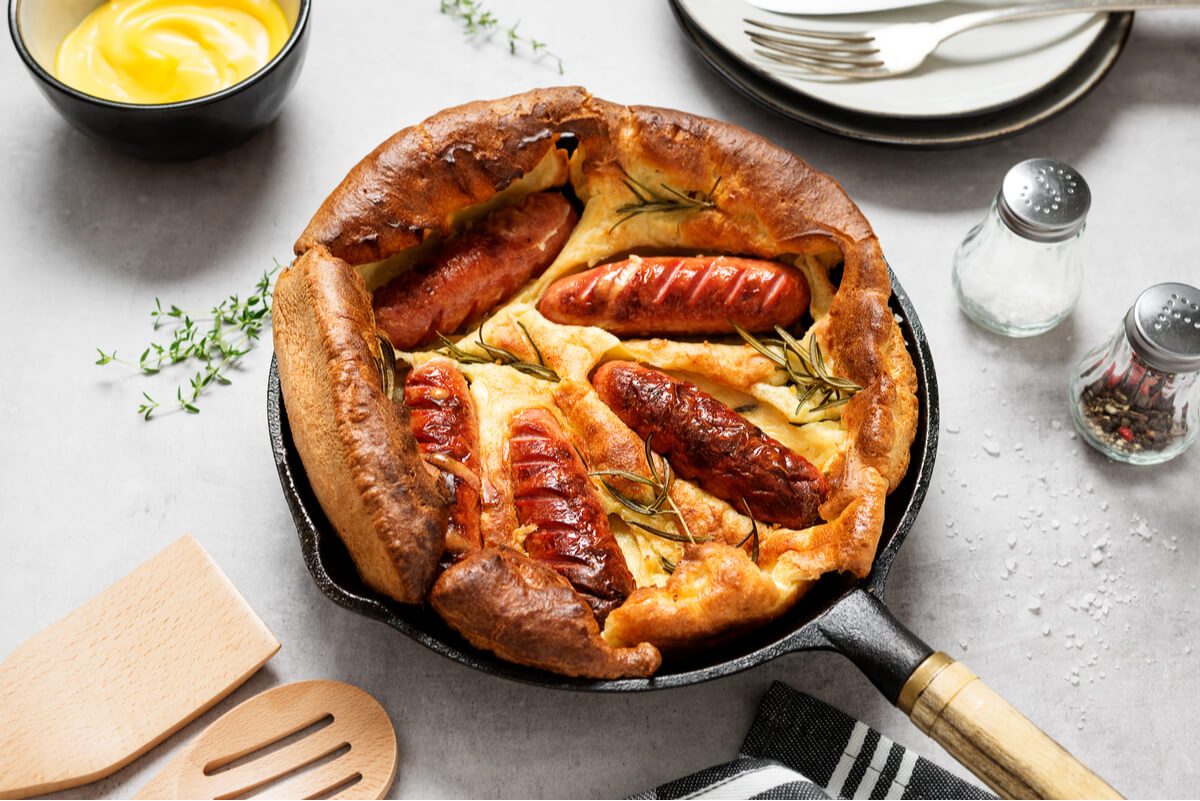 Pour the batter mix on the baking dish containing the sausages. Put the contents back in the oven for 25 to 30 minutes until the crust rises and becomes golden brown. Serve the baked dish with vegetables and gravy. 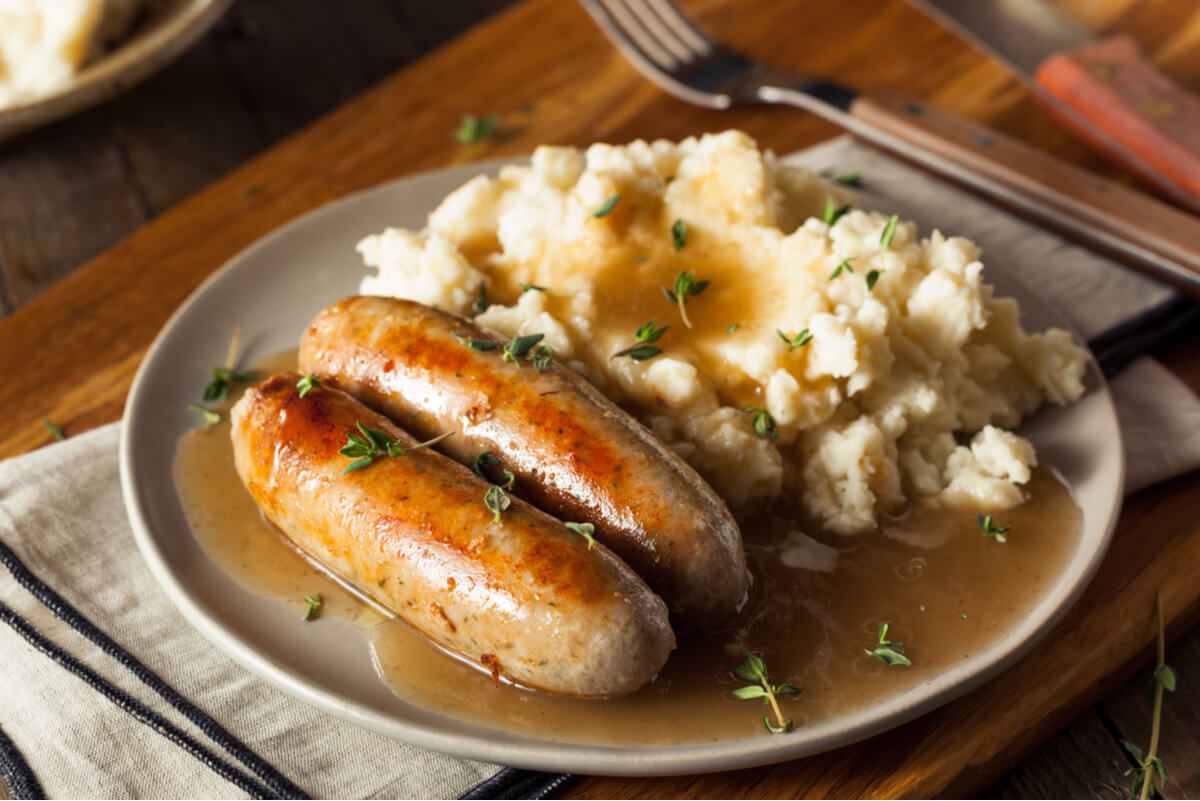 Bangers and mash, also known as sausage and mashed potatoes, is a popular English food. Most pubs serve this food with onion gravy and peas. It is the most popular comfort food among the English.

Pan-fry the sausages for 10 minutes. Remove the sausages and use the same pan to roast finely chopped onions. Use butter to fry the onions. Add thyme, bay, and sugar as you cook through. Add sausages into the mix and bake everything for 20 minutes.

Cut, wash, salt, and boil potatoes as the sausages cook. Mash the potatoes with milk and butter. Mix the ingredients until the resulting mixture is fluffy and soft.

I love to make a vegetarian version of bangers and mash using plant-based sausages and my favorite Instant Pot Mashed Potatoes or Garlic Mashed Cauliflower. 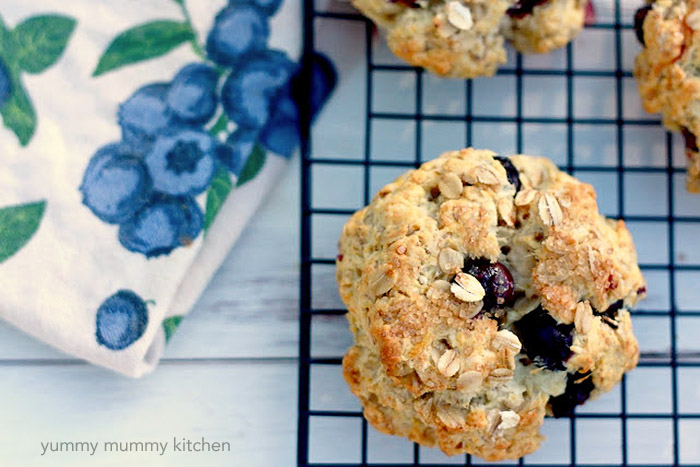 Scones are a type of quick bread that originated in the UK. They are usually made with baking powder, butter, milk, and flour. Plain scones are often served with clotted cream, lemon curd, and jam.

I love to make Blueberry Oatmeal Scones, but there are many different flavors of scones, such as: 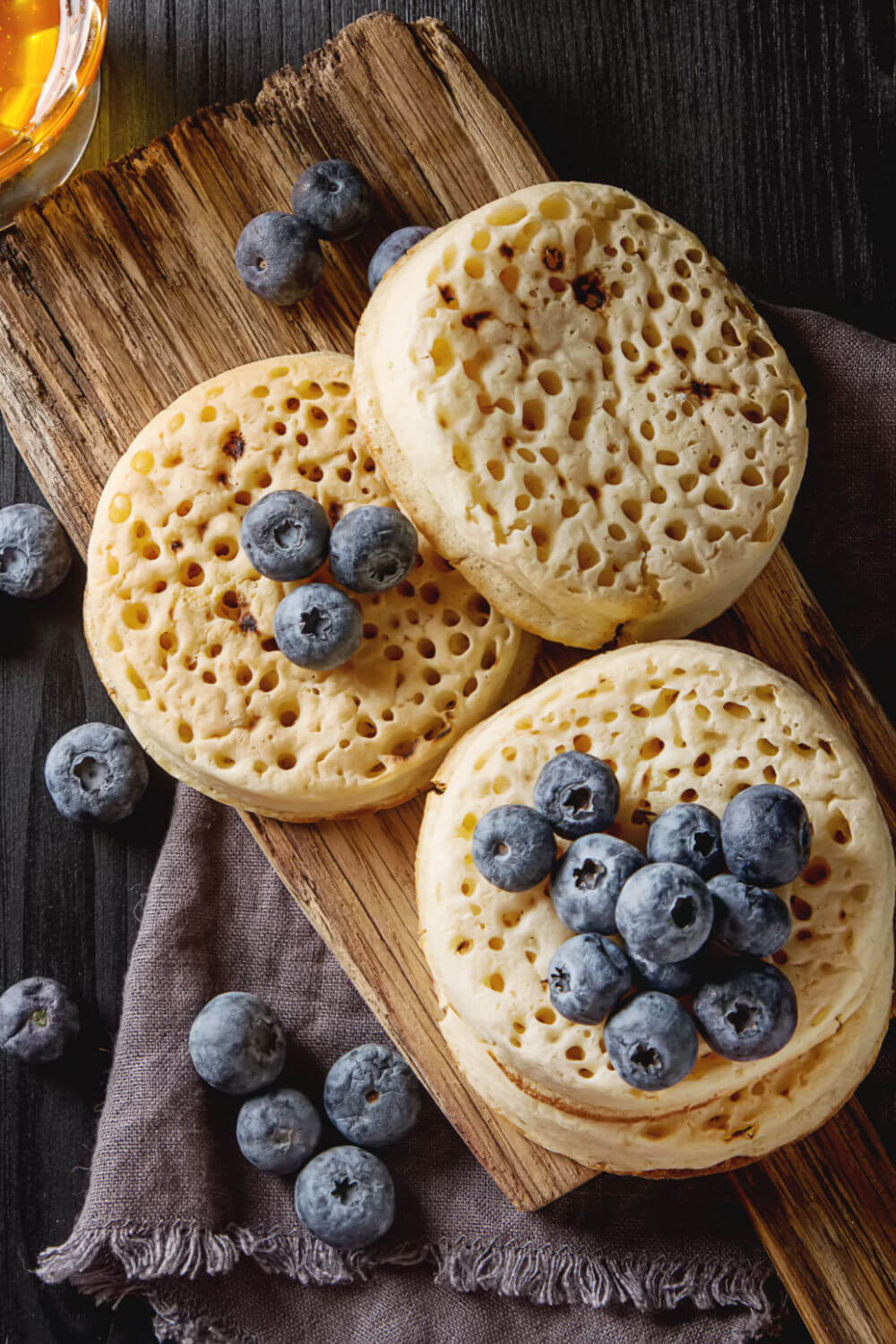 A crumpet looks more like a pancake, but instead of baking powder, it has yeast. The rising agent makes the butter produce bubbles, thickens the dough, and makes it fluffy. It is also only cooked on one side. The pastry is also chewy compared to the English muffin. Serve the crumpet while warm with butter or jam (jelly), bacon, and fried eggs.

We like the English crumpets from Trader Joe’s but you can also make them at home.

Beans on toast is a classic quick and easy simple British snack. Learn how to make Beans on Toast the British way! 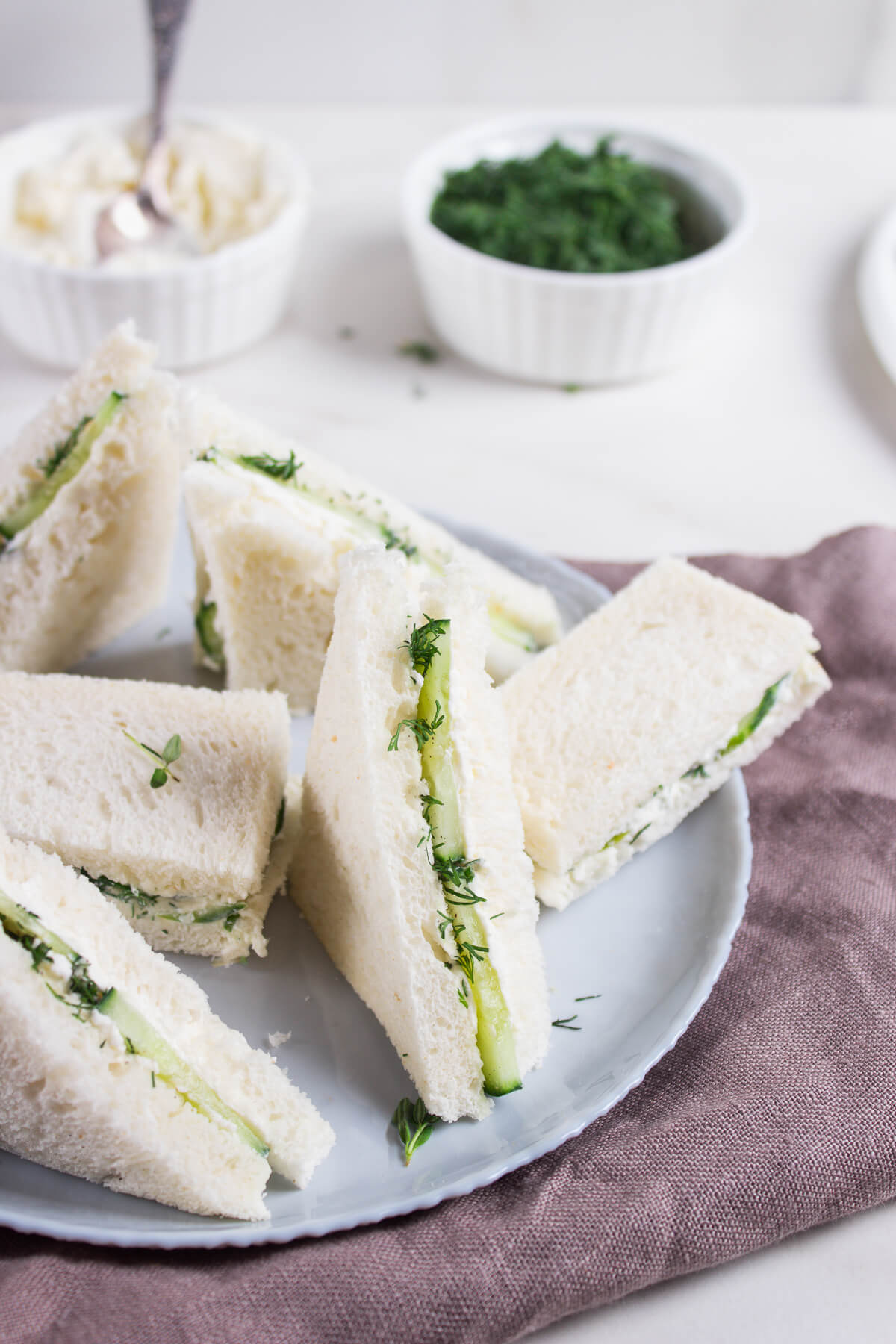 Cucumber sandwiches are a popular British food that is often served at afternoon tea. They are made with thin slices of cucumber, bread, butter, and herbs. The crusts are usually cut off the bread and the cucumbers are sliced very thinly. 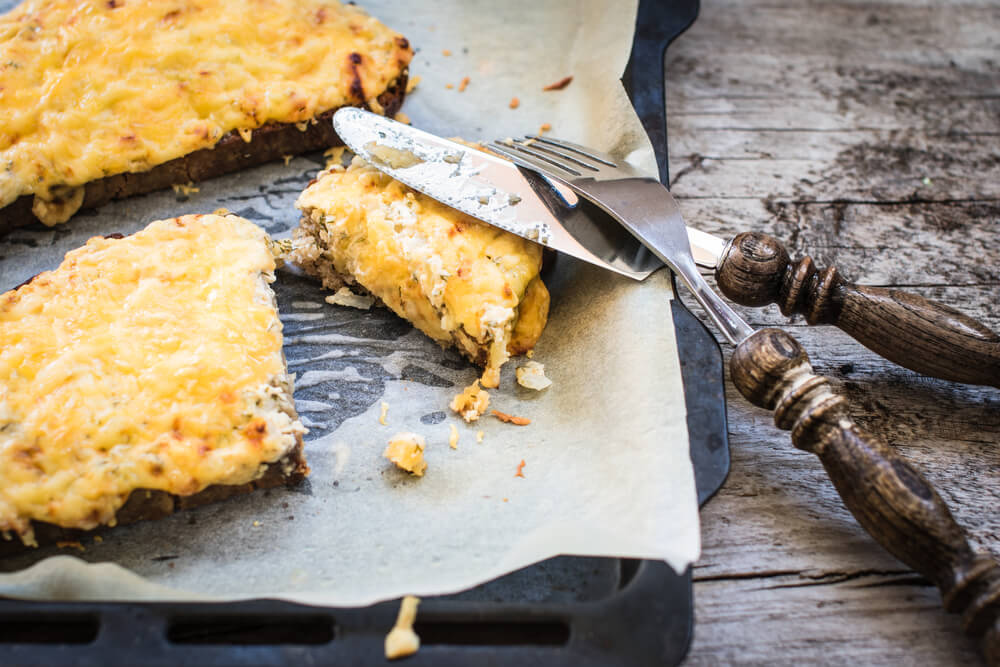 Welsh Rarebit is a type of cheese toast that is made with Welsh cheese, Worcestershire sauce, mustard, and a few other ingredients. It is often served as a main course or as a snack. Try this recipe to make it at home. 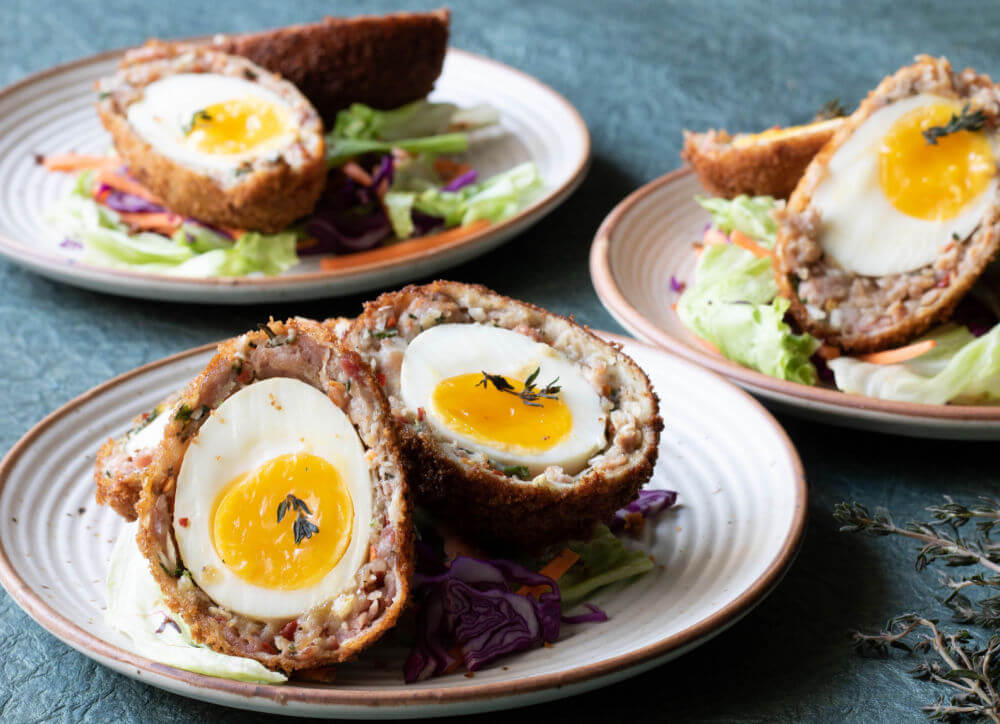 A Scotch egg is a hard-boiled egg that is wrapped in sausage meat, breaded, and fried. It is believed that the original Scotch egg was created by department store Fortnum & Mason in 1738.

Mushy peas are a traditional British side dish made from dried peas that have been soaked and then boiled until they are soft and mushy. They are often served with fish and chips.

This traditional side can be found canned next to the Heinz beans in some British stores, though I recommend making it yourself.

A pasty is a type of baked pastry that is typically filled with meat and vegetables. Pasties are very popular in Cornwall, England, and are often eaten as a quick lunch or snack. My kids love making Harry Potter-inspired Pumpkin Pasties.

Sticky toffee pudding is a dessert that originates from the UK. It is made with a sponge cake that is covered in a toffee sauce. The pudding is often served with ice cream or custard.

Spotted Dick is a traditional British dessert made with suet pastry and raisins. The dessert is steamed and usually served with custard. You can find this popular dessert made by Heinz canned in the UK and in the US (see the recipe card for shopping links). 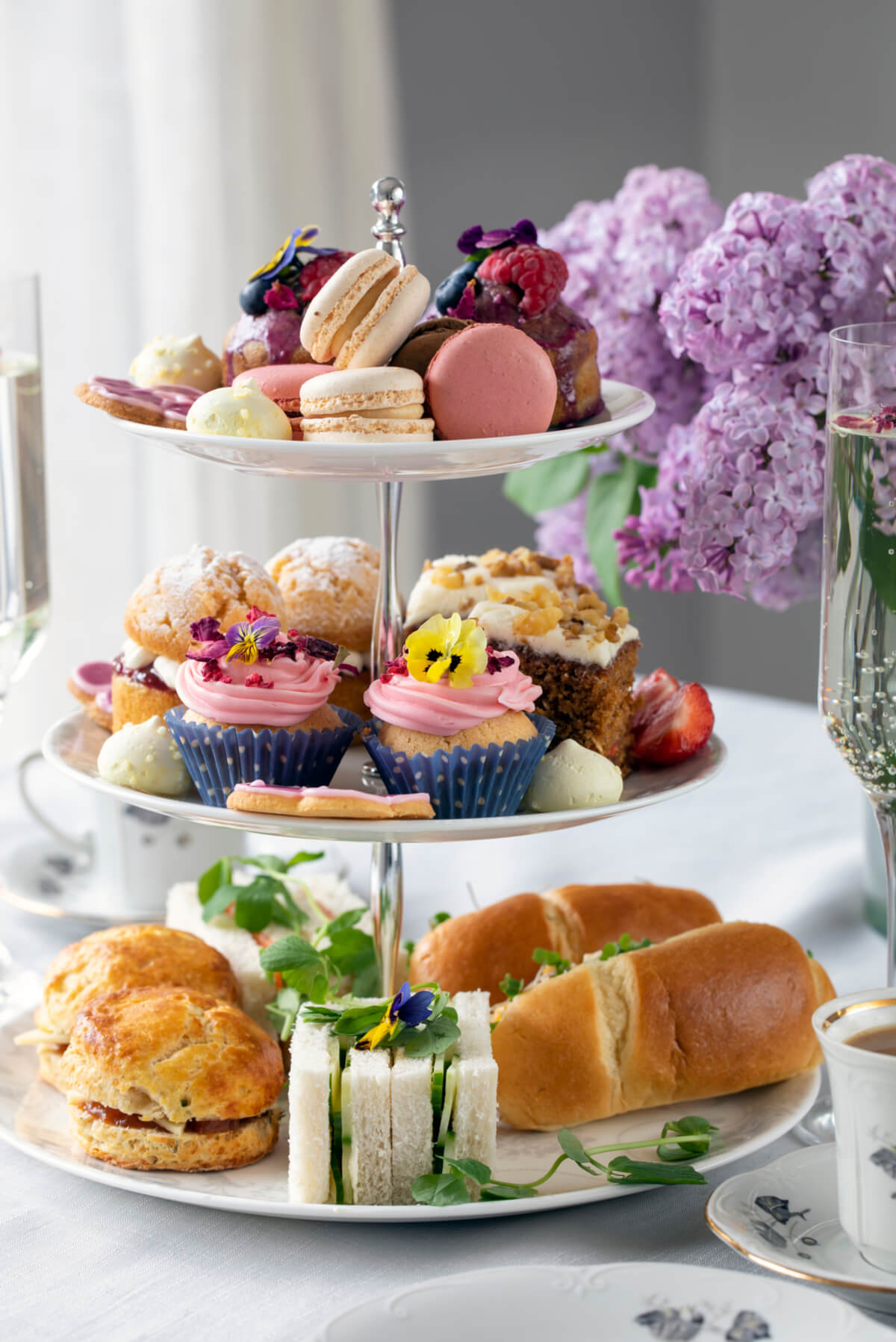 No list of traditional British foods would be complete without including afternoon tea. English afternoon tea consists of hot tea served usually served with cream and sugar, and an array of tasty finger foods.

While British food may not be renowned worldwide, many delicious and popular dishes originate from the UK. From Indian curries to sticky toffee pudding, there is something for everyone to enjoy. If you’re not sure where to start, start simple with Beans on Toast or invite your friends over for a posh English afternoon tea with homemade Shortbread. 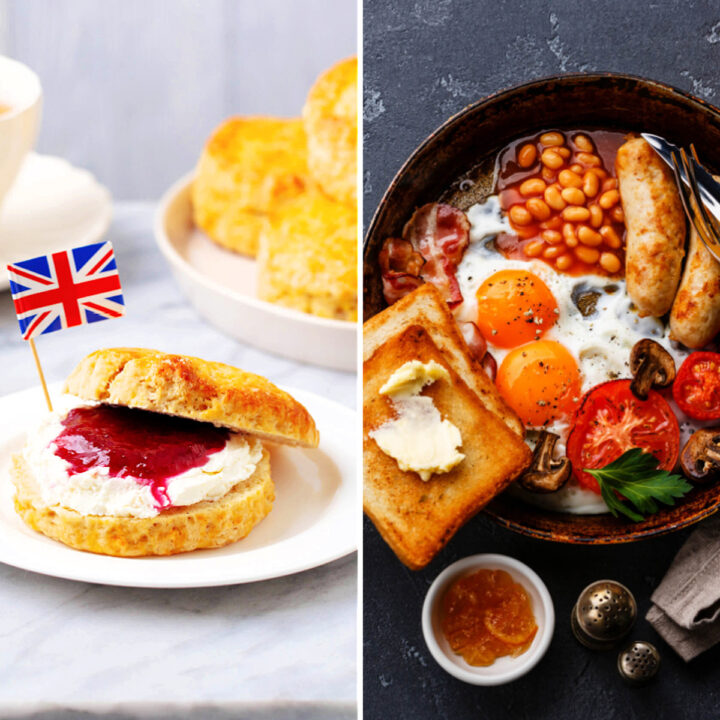 Choose one or more of these traditional British foods to try out or at home.

As an Amazon Associate and member of other affiliate programs, I earn from qualifying purchases.

« Previous PostHow to Freeze Peaches
Next Post » Does Pecan Pie Need to be Refrigerated? 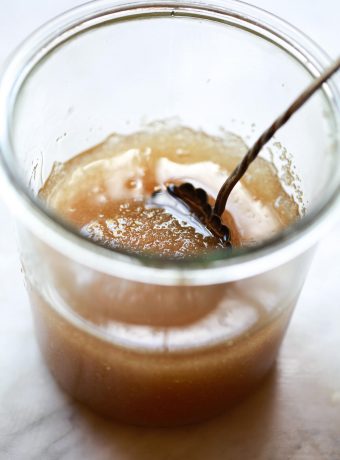 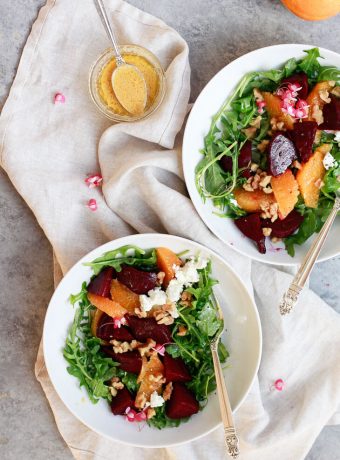 3 comments on “Popular Traditional British Foods to Order or Prepare” 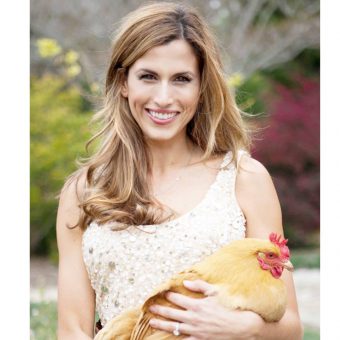 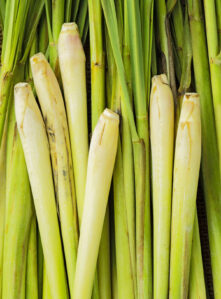 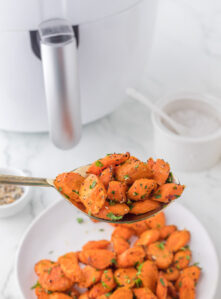